Women in Sportsasting:
The Next Chapter 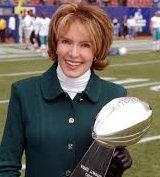 September 14, 2017 - It’s been 20 years since I wrote the article “Women in Sportscasting: A Brief History,” which described how  pioneers like Jane Chastain, Donna de Varona, Lesley Visser, Gayle Gardner, Phyllis George and Jeannie Morris struggled to break down barriers to enter this male dominated field.

Morris enjoyed a groundbreaking 24-year career as a Chicago sports writer and broadcaster and now runs her own production company, Adventure Divas.  Early in her career, she was not allowed to enter the press box because she was a woman so she had to cover an NFL game between the Bears and Vikings outside in the stands during a blizzard!

Fortunately, women have made significant strides since then and I’d like to think the ASA had a small part in it.

Women in the Broadcast Booth

While women have seemingly secured their place in sportscasting as reporters and studio hosts, they have another battle on their hands - the broadcast booth -where they are currently trying to make their mark.

Here are some of the women who are making progress in the play-by-play and analyst roles.

ESPN’s Jessica Mendoza made history in 2015 as the first woman to cover a nationally televised baseball game and is an analyst on “Sunday Night Baseball” alongside ASA Lifetime member Dan Shulman and Aaron Boone.

Since 2003, Suzyn Waldman has served as the color analyst for the New York Yankees on WFAN Radio with partner John Sterling. Waldman made history as the first voice heard on WFAN when the station debuted in 1987 and was the first female radio beat reporter covering the Yankees and Knicks.

Ann Meyers Drysdale, a pioneer in women’s basketball and the first woman to call an NBA game on network television, is one of two women working as a TV color analyst in the NBA. Drysdale handles that responsibility for the Phoenix Suns and Stephanie Ready calls games for the Charlotte Hornets.

Drydsdale, a longtime member of ASA,  agrees that the  next generation of women sportscasters need to be equipped with play-by-play skills.

“When young women ask me about getting into the business (being in front of the camera), I always suggest that they learn to do play-by-play,” Drysdale said. “Not many women are in that position and I think it gives them more opportunities. When I worked for Sports Channel in Chicago, I used to do play-by-play for softball, volleyball, high school baseball, and even wrestling.”

Hannah Storm, who made her mark as a top Studio Host at NBC where she covered myriad events such as the Olympics, Wimbledon, U.S. Open Golf, the NBA,  the NFL, figure skating and Major League Baseball, was the first play-by-play announcer of the WNBA in 1997. The ASA member was also the first woman in American TV history to act as a solo host of a network's sports package when she hosted NBC’s Major League Baseball games from 1994 to 2000.

Michele Tafoya, NBC’s “Sunday Night Football” sideline reporter is no stranger to play-by-play either. In 1996, the ASA Lifetime Member made history at CBS when she was the first woman to call television play-by-play of an NCAA tournament game. On the radio side, Tafoya is currently the co-host of the “KQ Morning Show” on KQRS FM in Minneapolis, Minn. with longtime morning personality Tom Barnard.

Krista Blunk is a solid play-by-play broadcaster and analyst who has done work for the Pac-12 Network, ESPN, FSN, and Westwood One. The ASA member has covered a variety of women’s sports including soccer, basketball, volleyball and softball.

New ASA member Lisa Cornwell, who joined the Golf Channel in 2014, previously did play-by-play for the Big Ten Network.

Lesley Visser, ASA Advisory Board member and veteran CBS reporter who is the only woman inducted into the Pro Football Hall of Fame, became the first female NFL color analyst in 2001on Westwood One. She has also done play-by-play of Miami Dolphins preseason games. Now in her 43rd year covering sports, the sportscasting pioneer is the first sportscaster, male or female to have worked on the network broadcast of the Final Four, the Super Bowl, the World Series, the NBA Finals, the Triple Crown, the Olympics, the US Open, and the World Figure Skating Championship.

ESPN’s Beth Mowins who has handled play-by-play primarily of women’s sports since 1994 as well as men’s college football since 2005, has also done preseason games for the Oakland Raiders the last several years.

Mowins, an ASA Lifetime Member, is set to become the first woman in 30 years to handle play-by-play of an NFL game. She will call the second game of ESPN’s “Monday Night Football” season opener doubleheader with Rex Ryan on September 11.

CBS has also added her to their announcing lineup, making her the first woman ever to do NFL play-by-play for the network. She will team with Jay Feeley to call the Browns-Colts game on September 24.

You have to go back to 1987 when Gayle Sierens, a sports reporter turned news anchor for WFLA, an NBC affiliate in Tampa, called the regional regular season finale between the Seattle Seahawks and the Kansas City Chiefs on NBC.

Hopefully, with Mowins gaining the national exposure of calling a Monday Night Football game as well as on CBS, it will set the wheels in motion for more women to be given these opportunities on a regular basis.

Another area where women have yet to make their mark is sports talk radio. In some markets, the audience demographic can be as high as 90%  male. This makes it difficult for a woman to be accepted. However, here are some of the women who are making strides over the airwaves.

ESPN Radio’s “The Trifecta” hosted by three women, Sarah Spain, Kate Fagan and Jane McManus,  is the first show of its kind.

ASA member Kim Jones, a well-respected NFL insider on the NFL Network, can be heard regularly on WFAN Radio as a fill-in host or co-hosting with Marc Malusis.

Anita Marks, who hosted her own show on Baltimore’s 105.7 The FAN, graces the airwaves on weekends on ESPN Radio in New York.

Bonnie Bernstein, former NFL sideline reporter on CBS who worked with ASA Chairman Dick Enberg and ASA Board member Jim Nantz, has co-hosted “The Michael Kay Show” and “New York Football Live” with Greg Buttle on ESPN radio. She is also the only female fill-in host for the “The Dan Patrick Show.”

Veteran Chicago sportscaster Peggy Kusinski was a popular sports talk show host on ESPN Radio and WMAQ. After serving as a sports anchor and reporter at Chicago’s NBC 5 for 16 years, the ASA Lifetime Member is now developing investigative and in-depth sports stories for the station.

Amy Lawrence, well-traveled veteran of sports radio and television, has hosted the nationally syndicated show “After Hours with Amy Lawrence,” on CBS Sports Radio since 2013.

ASA member Elissa Walker Campbell has taken a similar path as Ann Liguori, the first woman to have a sports call-in show on WFAN Radio which aired weekly from 1987 to 2008. The Lifetime ASA member also owned, produced and hosted “Sports Innerview,” a cable series that first aired in 1989 on Madison Square Garden Network. where she interviewed hundreds of sports icons including Mickey Mantle, Ted Williams, Wilt Chamberlin, Wayne Gretzsky and Sugar Ray Leonard.

Campbell, who got her start as Oklahoma's first women's basketball radio color commentator, hosts and executive produces  “The Big E Sports Show.” Under her leadership, the show expanded to air on 20 stations and websites. This drew the attention of Yahoo! Sports Radio which picked up the program and debuted it nationally in 2013.

While women have come a long way since there was a sign outside the pressbox that read, “No Women or Children Allowed,” there is still work to be done, and the American Sportscasters Association will do its best to help our women members and all female sportscasters continue to break down barriers and strive for equality in the sports broadcasting field.