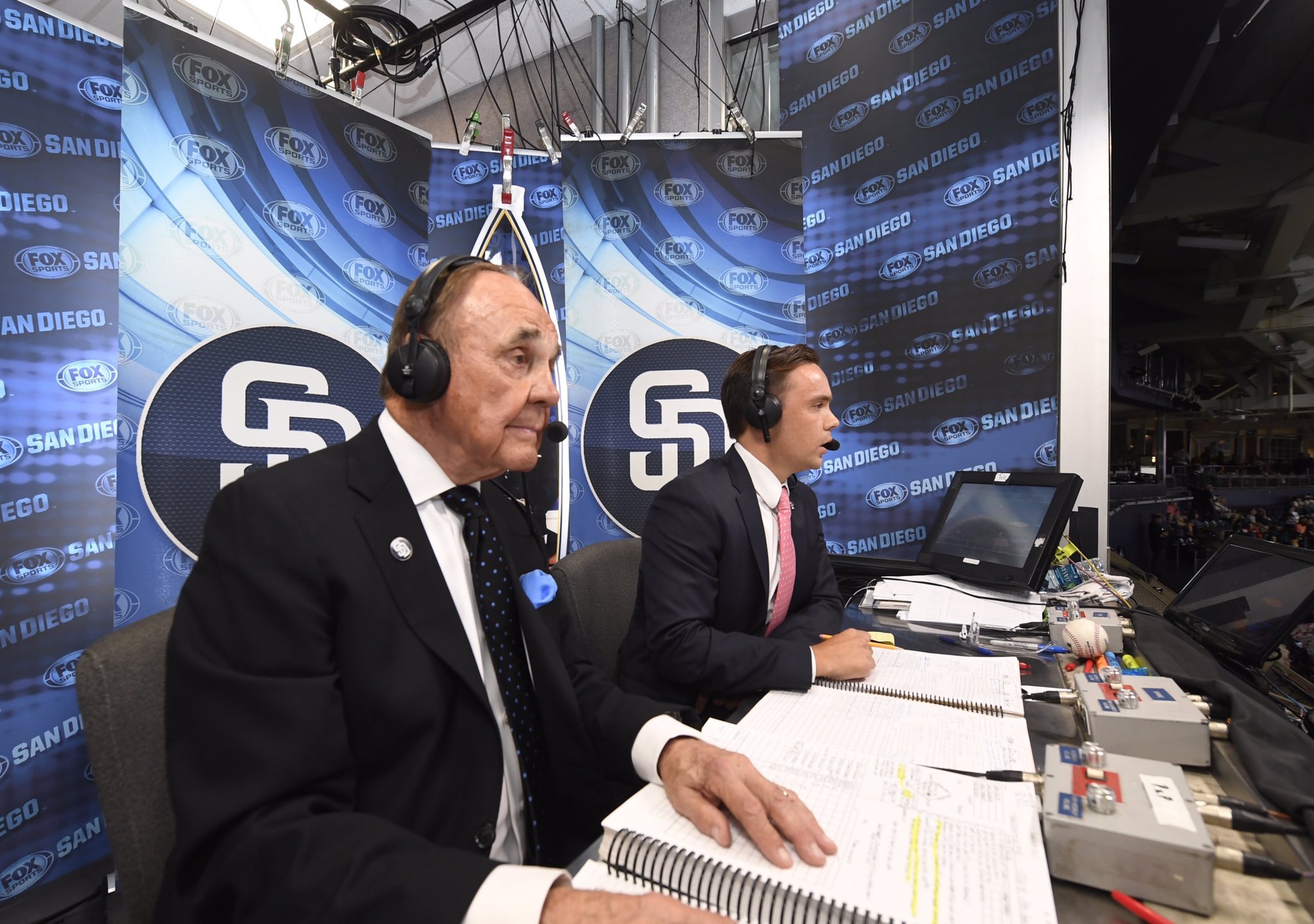 Dick Enberg gets a surprise visit in the booth from his son, Ted, and the two work an inning during the Padres' final home game of the 2016 season

The accomplishments of Dick Enberg in the sports community are numerous. He is truly a legend in the industry and we, as San Diego Padres fans, have been lucky enough to witness his masterful use of the English language firsthand. From Chargers games on television to recent endeavors with the Padres, listening to the elder Enberg call a game is a complete joy.

After 44 years of service, Mr. Enberg is stepping away from the game, sort of. He will not call it a retirement, and nor should you, as the man is driven beyond description. Spending his afternoons golfing or relaxing is not desirable to this man. Dick Enberg will surface somewhere, in some manner. He will be seen more in and around the game and the Padres team. That you can be sure of. This “retirement” is nothing more than an honor being given to a man who mentored so many. It gives everyone the opportunity to pay their respects to the man, accolades that are much deserved for this former farmer from the state of Michigan.

On September 29, during the Padres last home game of the year, Dick Enberg was being honored by the team. In a very touching moment, the Padres brought his 28-year old son, Ted Enberg, on-air to call an inning with his dad. The younger Enberg recently was bitten by the announcing bug and welcomed the whole experience greatly. The inning of work with his dad was a total surprise to the elder Enberg, and he truly loved every minute of it. “It definitely was a dream come true for me. There could not be a better father-son moment than that for us. Sharing a broadcasting moment with someone who has been in the industry for 50-plus years, who is also my father, was special. It was a passing of the torch, if you will. All the countless hours we spent together getting prepared to broadcast. All the tips and video. It was a beautiful culmination of all that.” You can watch that moment down below, as the two Enberg’s call their first inning of major league baseball together.

Recently, I caught up with Ted Enberg to reflect about his dad, that night announcing with his father, and life in general. Ted is just starting his journey as a sports announcer, so its exciting to hear his thoughts. It has only been 10 months that he has truly pursued this new passion in his life, a new passion that will surely result in numerous accolades.

He currently works for the San Francisco 49ers in the corporate sales department. Being that he is in the Bay Area, he found an announcing job with Stanford University. Ted currently can be found as the Soccer play-by-play announcer for the school. He is sharpening his skill in every capacity he can find in the sports kingdom. The flow and speed of the game, and relaying that to a crowd on air, is a technique that is mastered over time. Participating in a fast-moving sport like Soccer will only sharpen his tools expedientially.

In 2015, Ted worked as the play by play announcer for the Long Beach State Dirtbags baseball team. He did games for the school via JKJZ Radio in Long Beach, California, and that was his first time broadcasting the sport of baseball. He admitted that he was pretty bad at first, but in time he became more comfortable behind the mic. He told me “That was a fantastic opportunity. It gave me the feeling of this is something I want to pursue.”

Becoming a broadcaster was something that was never really an option for Ted (he refused to pursue it). He has a very diverse background, and though many around him insisted he give it a try, he simply chose to stay away from it. The young Enberg has always been around the sports industry, as he has worked for three different NFL franchises (49ers, Dolphins and Chargers), an MLS franchise (DC United) and numerous universities. He has a passion for sports and could not stay away from the industry.

Despite his passion, getting behind the mic was something that he naturally had a lot of trepidation about. He tells me candidly; “Touching the area of broadcasting, to me, was a big fear because of my father’s reputation and what he has achieved in his life. It was kind of an area that I didn’t want to go in. I viewed it as his space. I always had an interest, though. I love talking about sports.” Pretty interesting that he chose not to get into the industry because of his dad’s reputation. That type of behavior shows me that he has much respect for what his dad has accomplished. Ted refused to jump into the industry early out of college, with an ego. Instead he’s chosen to work his way up and follow a path similar to what his dad had to experience. Ted Enberg has ambitions of being an NFL announcer. That is what he really wants to do. However, he is more than willing to refine his skills and earn his keep. You have to respect that from a man who is the son of an announcing god.

How he finally got behind the mic is a unique story and it is also an indication that he has a calling for the job. After turning his back to the industry, he has now embraced it. It’s a lesson in life that we all should learn. Sometimes those around you have a better idea of who you are. Take their opinions in and embrace them. The ultimate path you seek will only be found by you, but with the assistance of others, the journey may be greatly shortened.

“Virtually my whole adult life everyone around me has told me to get into broadcasting. They told me I have such a great voice and a passion for sports, but I constantly shot it down. I was living in D.C. last year, working for an MLS team. There was a high school right across the street. Gonzaga College High School. One day my girlfriend, after years of telling me to try broadcasting, told me to go over there and ask them to let me broadcast one football game. She said if you do that, I won’t ever ask you again…. I walked over there and met with the Athletic Director and asked if I could help (and announce) for one of the football games. I did one football PA, announcing for Gonzaga College High School, and I was like, oh my god. I had a smile from ear to ear that night. I was like… I love this. It was something, my whole life, that I kind of ran away from, and that was the catalyst moment for me. After that, I was like… I want to do this.”

So there you have it. One push in the right direction and he is off and running. His beloved girlfriend should be commended for her actions. She knew where his heart was, he was just clouded by fear. That anxiety is gone now for Ted. He knows there will never be another Dick Enberg. His dad was one of a kind. With the feeling that he has nothing to prove to anyone, he can now focus on getting better and emulating the best resource in the world to become the best he can be behind the mic. His dad.

” Where do I need to be if I really want to take this seriously? Is what I told myself. I was 27 years old with little experience, and for me, the answer was coming back home to San Diego, California. I drove across the country all by myself. When I got home, my dad and I did two months of hard preparation work for my Long Beach State job. He was nervous. I was nervous. But everyday we practiced, and I got as ready as I could be for the season. He constantly gave me feedback and I worked on my craft all the time with his help.”

He has moved on from the Dirtbag baseball program and, like mentioned before, is up in the Bay Area working for both the 49ers and Stanford University. The baseball job was a learning experience for Ted and he enjoyed every minute of it. The information he gathered from his father’s notes is invaluable for his progression in the ind ustry. The San Diego native (Bishop’s High School) is very upbeat about everything and knows that when the time is right, he will get his chance. You can be sure he will be prepared when that time comes.

I learned more about Ted and asked him about broadcasting and what he enjoyed about the art. I wanted to know if there were any other announcers, besides his father, that he looked up to. I also was curious what he valued in a broadcaster’s ability; “Al Michaels and Cris Collinsworth have to be two of my favorites. The way they work together and provide information. You feel like you know them after watching the broadcast. They have that unique ability to connect with the audience. I look at that and see something to aspire to.”

Being that Dick Enberg is such a legend in the industry, I wanted to get to know Ted’s feelings on all that his father has done. The hall of fame enshrinement had to be a special moment for the family and I wanted to know his thoughts on that special day.

“Its been emotional. Its been hard to believe. What he has accomplished, from being a farm boy in Michigan, is amazing. The development and growth that he has been able to master in his career field. He is recognized as one of the best. The hall of fame induction was a realization to the whole family that he means so much, to so many people. He is in their living rooms. People feel connected to him… I know him as dad. All that other stuff doesn’t matter. I’m just proud of him. He’s done it the right way. He is a good guy.”

He is right. Dick Enberg is widely recognized as a great guy in the industry. There are tons of stories on how gracious and kind he is. Well let me tell you… the apple does not fall far from the tree. Ted Enberg was a delight to speak to. His passion for sports is obvious, as is his grasp for the English language. The man is Tri-Lingual (Spanish and Mandarin Chinese), so conversing in English is no big deal. Transmitting his passion to you the viewers/listeners is something that he is currently working on. With a little luck and more hard work, Ted Enberg will be a house-hold name one day like his father. Those are huge shoes to fill, but if you ask Ted, he is just doing what he loves and the rest will come as it does.

I’ll leave you with this quote that Ted proclaimed to me. His father drilled this into him and its simplicity really speaks volumes to the job of a professional sports announcer. More in the industry should live by this creed.

“You are being of service to the audience. It is not about you.”