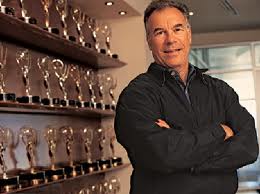 In March 2011, Sabol was diagnosed with a tumor on the left side of his brain after being hospitalized for a seizure.

His father, Ed, founded NFL Films, and Steve was there working beside him right from the start in 1964. They introduced a series of innovations now taken for granted today, from slow-motion replays to blooper reels to sticking microphones on coaches and players. And they hired the ''Voice of God,'' John Facenda, to read lyrical descriptions in solemn tones.

''Steve Sabol was the creative genius behind the remarkable work of NFL Films,'' NFL Commissioner Roger Goodell said in a statement from the league confirming Sabol's death. ''Steve's passion for football was matched by his incredible talent and energy. Steve's legacy will be part of the NFL forever. He was a major contributor to the success of the NFL, a man who changed the way we look at football and sports, and a great friend.''

Ed Sabol was elected to the Pro Football Hall of Fame last year. The two received the Lifetime Achievement Emmy from the National Academy of Television Arts and Sciences in 2003.

''We see the game as art as much as sport,'' Steve Sabol told The Associated Press before his father's Hall induction. ''That helped us nurture not only the game's traditions but to develop its mythology: America's Team, The Catch, The Frozen Tundra.''

Steve Sabol received 35 Emmys for writing, cinematography, editing, directing and producing. No one else had ever earned that many in as many different categories.

He began his career as a cinematographer under his father. Steve was the perfect fit for the job: an all-Rocky Mountain Conference running back at Colorado College majoring in art history.

''His work humanized the players, coaches and people who have made the National Football League so great,'' said San Francisco 49ers CEO Jed York.

''Today of course those techniques are so common it's hard to imagine just how radical they once were,'' the younger Sabol told the AP last year. ''Believe me, it wasn't always easy getting people to accept them, but I think it was worth the effort.''

An accomplished collage artist, Sabol exhibited at the ArtExpo in New York, the Avant Gallery in Miami, the Govinda Gallery in Washington, the Milan Gallery in Fort Worth, Texas, and the Garth Davidson Gallery in Moorestown, N.J.

It was Steve's high school football games in Philadelphia that gave Ed his only experience filming sports before he won the rights to chronicle the 1962 NFL championship game.

''This is a sad day for football fans everywhere,'' Indianapolis Colts owner Jim Irsay said. ''As someone who grew up watching NFL Films creations, I can attest to Steve's vision and contribution to the incredible popularity of this sport. His, along with his father, Ed's, creativity and passion for the game cultivated many, many avid fans.''