Are You Ready for Some...Rex?
by Bob Raissman, NY Daily News 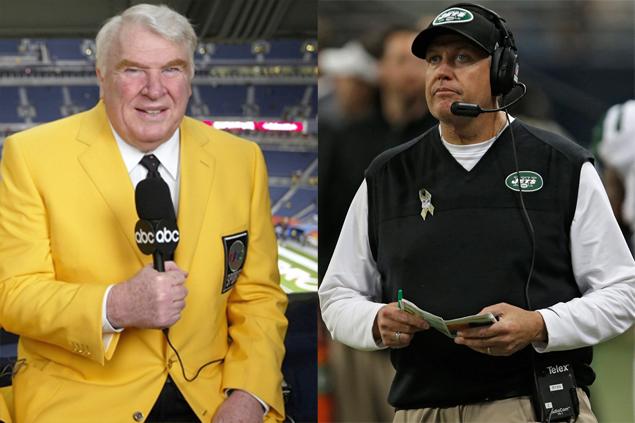 In his four seasons with the New York Jets, Rex Ryan has done a damn good job feeding the media seals. With the charismatic personality and big shtick, the coach is a magnetic force. He delivered us from the darkness of Mummy Mangini's Tomb into the light. This is why we hope Ryan returns to the sidelines next season.

Yet should he be fired, Ryan won’t be unemployed very long. He instantly becomes a hot TV commodity. One network executive predicted Ryan would be the most sought after broadcasting rookie free agent “since Joe Montana hung up his cleats.” Unfortunately, Montana bombed on NBC’s pregame show. It is highly unlikely Ryan would go belly-up in front of the camera.

One only has to study his press conferences to know the probability of success is sky high. Ryan has the same everyman quality John Madden, the finest analyst/personality to ever grace an NFL microphone, possessed. The network landing Ryan would be getting a guy with the potential to become a transcendent personality. Not only would Ryan appeal to the hardcore fanatic, but to the casual fan as well.

As good as some of the top TV analysts are, none of them have a personality that transcends the game. They are all confined to a football box. They do a fine job, but don’t register with Aunt Tillie. Ryan is larger than life. He’s a natural, that’s who he is. So, if Woody Johnson decides to give Ryan the boot, which network would he end up with?

It always starts at ESPN, Even though they have a boatload of NFL analysts, the faculty has always been willing to add another mouth. The wheels of the most intriguing scenario would be set in motion should Jon Gruden, always at the forefront of coaching rumors, bolts “Monday Night Football” at the end of the season to return to the sidelines.

If Ryan were available, ESPN would have to take a serious look at moving him in the “MNF” booth with Mike Tirico. There’s no one out there who could bring more buzz and a huge upside to ESPN than Ryan.

With NBC (Cris Collinsworth), Fox (Troy Aikman) and CBS (Phil Simms) having the finest analysts in the game, Ryan wouldn’t be cracking into that lineup, unless one of the networks wanted him so bad it would go to a three-man configuration. NFL Network execs haven’t been shy about making changes in their Thursday night booth. With the big-time personality and buzz he could bring, would NFLN honchos see Ryan as a major upgrade over Mike Mayock’s technical stylings?

Any of the pregame shows would be a good venue for Ryan to rattle cages while speaking openly and passionately. With the exception of NFLN, ratings for all afternoon pregame shows are down. Ryan could help change that equation. He could also become a presence on NBC and CBS’ cable sports outlets.

If Ryan is cut loose, there will be a TV place for him to land. The suits better think long and hard. For if they pass on Rex Ryan they could be passing on the next big thing.