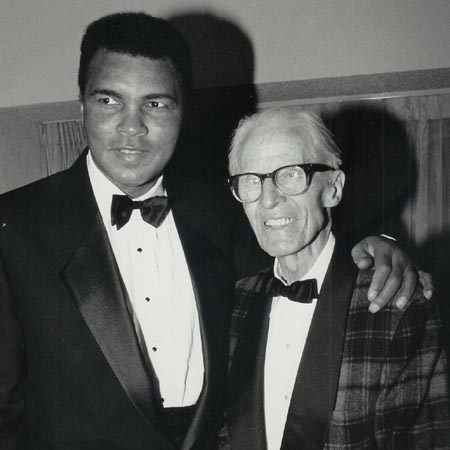 June 4, 2016 - Muhammad Ali, a three-time heavyweight boxing champion and recipient of the American Sportscasters Association’s(ASA) Sports Legend Award, died on June 3, 2016, at a Phoenix-area hospital where he was being treated for respiratory complications. He was 74.

Ali, one of the most recognized figures in sports history, suffered for three decades with Parkinson’s disease which robbed the outspoken boxer and social activist of his speech and motor skills.

Born Cassius Marcellus Clay on Jan. 17, 1942 in Louisville, Kentucky, to middle-class parents, Ali started boxing when he was 12, winning Golden Gloves titles before heading to the 1960 Olympics in Rome, where he won a gold medal as a light heavyweight.

He turned professional shortly thereafter, and relocated to Miami to work with top trainer Angelo Dundee and build a case for getting a shot at the heavyweight title.

During a time of racial tension, Clay became very frustrated with the prejudices he faced in and out of the ring, and soon turned to the Nation of Islam and the group’s leader, Malcom X, for support. He secretly converted to Islam in 1963 but wouldn’t make the announcement until he was champion.

That came in 1964 when Sonny Liston agreed to give the 22-year-old a shot at the title. Liston was an intimidating figure but that didn’t stop the confident Clay from calling the champ “the big ugly bear” and vowing to “donate him to the zoo” after the match.

Clay made good on his words, beating Liston by a sixth round TKO. After the fight, a jubilant Clay shouted, "I am the greatest! I shook up the world. I'm the prettiest thing that ever lived." The next day, he announced that he was a member of the Nation of Islam and soon changed his name to Muhammad Ali.

In 1967, at the height of the Vietnam War, Ali was drafted by the U.S. Army, but refused to serve citing it was against his Muslim religion. Ali was swiftly stripped of his boxing title and sentenced to five years in prison.  He appealed the decision and after a long legal battle, the decision was finally reversed by the U.S. Supreme Court in 1971.

After several smaller bouts, Ali was soon back in a sold-out Madison Square Garden fighting Joe Frazier in a match dubbed “The Fight of the Century.” The 15-round duel ended with Ali suffering his first loss as a pro.

There were many more epic battles to come, including “The Rumble in the Jungle” when he fought George Foreman in Zaire, Africa.  Ali introduced a new “rope-a-dope” style which helped him regain the title with an eighth-round knockout.

Then there was the third fight in the Ali-Frazier trilogy in 1975, billed as “The Thrilla in Manilla,” which is regarded as one of the best boxing matches of all time. Ali won in a technical knockout in the 15th round.

During his rise to fame, the brash Ali forged an unlikely friendship with ABC sportscaster and ASA Hall of Famer Howard Cosell. The “Tell it Like it Is,” announcer covered many of Ali’s bouts and his ringside interviews were often controversial and very entertaining, with the two going head to head exchanging verbal jabs. In one instance, Cosell accused the boxer of being “extremely truculent.” “Whatever truculent means, if that’s good, I’m that,” Ali countered. In fact, when Cosell was inducted into the ASA Hall of Fame in 1993, it was Ali who accepted the award for his longtime friend who was ill at the time and couldn’t attend the event.

Two years earlier, Ali was honored by the ASA with the Sports Legend Award. Broadcasting icon Don Dunphy, known as “The Voice of Boxing” who called over 2,000 professional fights in his career, presented Ali with the award at the 7th annual Hall of Fame Dinner in front of a crowd of over 500 at the New York Marriott Marquis. Ali attended the black tie event with his daughter, Khaliah, who became very active in the association. She participated in many of the ASA’s endeavors, including its anti-drug program.

In his later years, Ali threw himself into humanitarian causes, traveling to Lebanon in 1985 and Iraq in 1990 to seek the release of American hostages. In 1996, he lit the Olympic flame in Atlanta, lifting the torch with shaking arms. In 2005, President George W. Bush honored Ali with the Presidential Medal of Freedom.

Ali’s funeral is set for Friday, June 10, in his hometown of Lousiville, KY, which will include a procession through his old neighborhood and other areas that are historically important to the boxing legend.