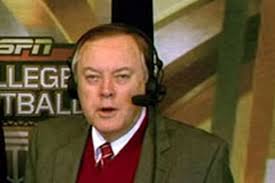 February 22, 2018 - Another one of ESPN’s elder statesmen has moved on. Mike Patrick, who has been with the network since 1982, left the “Worldwide Leader in Sports” on February 21.

Patrick’s last assignment in Bristol came on December 30, 2017, the Liberty Bowl between Iowa State and Memphis. The 73-year-old play-by-play man did not use the word “retire” which leaves the door open for him to explore other opportunities.

During his 35 years at ESPN, Patrick called “Sunday Night Football” from 1987-2005 with partners Joe Theismann and Paul Maguire. When NBC acquired the Sunday Night package in 2006, Patrick was named the lead play-by-play voice of “College Football Primetime” pairing with Todd Blackledge.

In 2009, ESPN announced Patrick would be calling Saturday afternoon college football games, the role he held until his departure.

Some of Patrick’s other assignments included men’s and women’s college basketball and the college World Series.