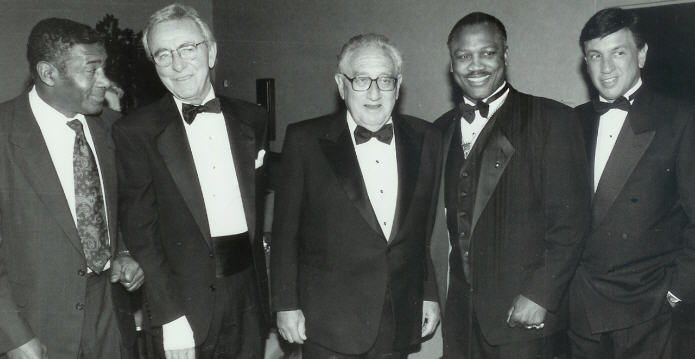 November 20, 2015 - In the late 1940s on the concrete courts of Manhattan Beach, Brooklyn, a band of young boys — like many young boys of the era — fell in love with basketball. Three-on-three pick-up games rolled on through the afternoon and into dusk until it became too hard to see the ball.

Amidst the sound of inflated leather smacking pavement and yelps to “pass it!” was the voice of one boy calling the play-by-play action with the tenor of a Marty Glickman, Vin Scully, or Les Keiter. Marvin Aufrichtig — or Marv Albert, as he would come to be known — was not that boy.

Marvin was far too shy (it was one of his close friends who was the mouth of the group). Instead, one of the greatest voices in sports history was crafted in the solace of his childhood home. A young Marv would sit in front of his family’s first television set, turn the volume down, and call a game into a small tape recorder that he had received from his dad as a birthday present.

“I still tell kids interested in sportscasting who hope to do this for a living to take that path,” says Albert. “I probably did hundreds of games in my living room.”

That boy — dreaming big in the City of Dreams — once wrote in an essay for his third-grade teacher that he wanted to grow up to become a sports announcer or a sports writer. Fifty years later, he’s the greatest sportscaster New York City has ever produced and is nationally regarded as “The Voice” of the sport he still loves.

For more than half a century, Marv Albert has been a radio, television, and pop-culture icon. With a flamboyant style, an archetypal voice, and back pocket full of catchphrases, he has been entertaining audience since the 1960s, when he first called a New York Knicks game.
Albert was the voice of the NBA on NBC Sports during the league's heyday in the late 1980s and 1990s.

He became the national voice of basketball when he worked at NBC Sports starting in 1977, a tenure that encompassed perhaps the NBA’s greatest era, dominated by the likes of Larry Bird and Michael Jordan. Albert is still the lead voice on NBA games, today on TNT.

Albert got his first break in the sports business when he worked as a ball boy for the New York Knicks. It was there he struck up a relationship with legendary New York sportscaster Marty Glickman. The former Olympic sprinter was one of the first athletes-turned-announcers, and he took a liking to Albert and his passion, bringing him on as a statistician and advising him to attend his own alma mater, Syracuse University.

However, when Glickman had an opening for a writer/producer at WCBS Radio, Albert hastened back to Manhattan, finishing his degree at NYU and working alongside Glickman fulltime. It proved a smart move: the position offered the opportunity to fill in for Glickman on occasion and actually had Albert on the mic calling several Knicks and New York Rangers hockey games at just age 19.

In 1967, Albert took over as the fulltime radio voice of the Knicks, and he wasted no time establishing himself as a fan favorite.

The legend of Marv Albert began to take shape during a playoff series against the Philadelphia 76ers that year. Knicks guard Dick Barnett rose for a timely jump shot that banked in off the glass, and Albert, for the first time, uttered the simple yet poignant signature call that still resonates today: “Yes!”

“It just seemed to feel right,” says Albert. “I’d throw it in every once in a while on big baskets. That was when I started hearing it said back to me. It made me realize that, Hey, people are actually listening.”

For Albert, the first love truly was the sweetest, and he still looks back glowingly at his favorite moment as an announcer when, just before Game 7 of the 1970 NBA Finals between the Knicks and the Los Angeles Lakers, future Hall of Fame center Willis Reed walked gingerly out of the tunnel at Madison Square Garden to take the floor despite a badly injured thigh.

“I remember Wilt Chamberlain turning and looking in astonishment as Willis was coming out of the tunnel just before the opening tip,” says Albert. “That was the loudest I ever heard a crowd at a basketball game.”

To illustrate just how much the industry has changed, that legendary game made it to television on ABC — on tape delay. The game pulled in a large radio audience, and, as a result, Albert’s words (“Now here comes Willis — and the crowd is going wild!”) have become forever linked with the moment.

Starting in 1977, Albert began a 22-year run with NBC Sports that made him the primary national voice of NBA basketball and also gave him the opportunity to call the NFL, college basketball, NHL All-Star Games, and even boxing during its heyday in the 1980s.

“[Getting] the opportunity to work with Marv on boxing was fantastic,” says broadcasting colleague and Sports Broadcasting Hall of Famer Al Michaels. “[He] has been such a great credit to the industry. He does every sport he takes on fantastically well.”

Though blossoming into a television star, Albert never lost his passion for radio, continuing to call the Knicks and actually maintaining a lengthy tenure as radio voice of MSG’s other tenants, the New York Rangers, for whom he handled play-by-play duties from 1965 to ’95. He also was the lead voice on Westwood One Radio’s coverage of Monday Night Football from 2002 to ’09.

All in all, Albert has called eight Super Bowls, 12 NBA Finals, eight Stanley Cup Finals, and four Olympic Games on television and radio. He added Wimbledon tennis to his résumé when TNT carried the tournament. He has won multiple Emmy Awards for his work and has been named top sportscaster in New York State a whopping 20 times.

“Whatever people are interested in doing as a career, there’s so much randomness, and you’ve got to have a little bit a luck,” he says. “You can have a lot of talent, but you’ve got to be fortunate enough to get a few breaks, too. I’ve been very fortunate to have the opportunity to be able to get those breaks. I never thought it would reach the point that it did.”

At age 74, Albert doesn’t see the finish line just yet. He’s already a member of the Naismith Memorial Basketball Hall of Fame — a fantasy that a tiny kid playing pick-up games on the street never could have concocted — but is still at the height of his career, calling national games for TNT and returning to serve as blow-by-blow announcer on NBC Sports for its Premier Boxing Champions coverage.

If you ask him, the ball boy from Brooklyn still has a lot left to give.

“As long as I feel that I am on the same level that I am right now,” he says. “In some ways, I think, you see things that you might not have seen several years ago. In terms of preparation, you can always be better, and I’m still looking for ways to be better at various aspects of the broadcast. So I think there’s still quite some time.”