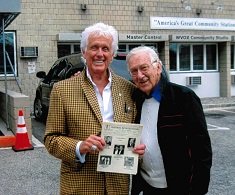 The program is designed to capitalize on the knowledge, experience and established national network of ASA broadcasters and media production professionals. It will provide returning veterans with a structured orientation and practical training in the production of television or radio sports, news or entertainment programming.

The ASA has joined the Wounded Warrior Project, a veterans service organization that offers a variety of programs, service and events for wounded veterans of the military actions following the events of 9/11, to implement this pilot program.

The goal of this program is to train the veterans so he/she will be equipped to seek meaningful employment upon completion.