Jason Benetti
A Voice for those with
Cerebral Palsy 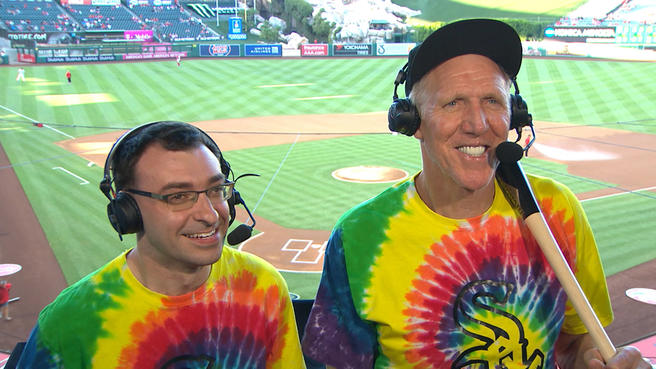 I thought you might enjoy this inspirational story on Jason Benetti, the play-by-play voice of the Chicago White Sox who was born with cerebral palsy, that was recently featured on "CBS Sunday Morning with Jane Pauley."

October 19, 2019- A baseball team's announcer can be as much a part of its appeal as any player. Think of Vin Scully in Los Angeles, or of late legends like Red Barber in Brooklyn and Harry Caray at Wrigley Field.

"You are part therapist, and part guide, and part entertainer," explained Jason Benetti. This season Benetti became the main announcer for the Chicago White Sox. The Sox finished a long way out of first place, but up in the booth, Benetti is one of the best.

The job isn't just to yell and yammer into a mic about what happens on the field; he makes the rounds before each game, talking to players, to tell their stories, and he preps his own distinct system for recording each play of the game.

"One of the best parts of baseball is that everybody keeps score differently," he explained to NPR's Scott Simon. It requires a proliferation of pens: "Green is for walks. Orange is for strikeouts. I use the purple for pre-game notes."

Benetti's partner in the booth is former pitching great Steve Stone. "I look at somebody who has the intensity of a professional baseball player, the intellect of a nuclear scientist, the abilities that are off-the-charts," he said.

Benetti goes back a long way with the White Sox: "When I was a kid, I came here a lot."

"Tell us about an essay you wrote when you were in grade school," asked Simon.

"I think 'essay' is a little bit of a stretch. Evidently, I wrote this essay that said, what I want to be when I grow up is the White Sox announcer."

It took 27 years, a law degree, and gigs calling college and minor league sports before Benetti joined the White Sox announcers in 2016.

Stone said, "He is an extraordinary human being who has overcome a situation that a lot of people don't overcome. And he's done it by sheer force of will. I have never seen a more determined guy."

What Jason Benetti has overcome, or at least contends with every day, is cerebral palsy.

"I was born premature," he said. "As my parents tell the story, nearly died. And a doctor helped save me."

Cerebral palsy, or CP, is a disorder that happens when parts of the brain that control muscles are damaged during pregnancy or birth. It can affect muscle coordination for walking, vision and speech. Benetti has had several surgeries, and years of physical therapy.

"I think I can see reactions that people give me, where people will smile and talk slowly to me," he said.

People can see Benetti has eyes that wander, and a walk he calls "funny." He says being so conspicuous just encouraged him to play the tuba in his high school marching band: "If somebody's gonna psychoanalyze a little kid who walks with a limp, of course he's gonna pick the tuba, the biggest one, because he's got a chip on his shoulder. But part of the requirement of band is that we march. And so, we decided that that was not terribly safe."

But he loved being part of the show. Benetti's band director had the idea to put him behind a microphone to call the band's routines. That's how Jason Benetti became an announcer: "They gave me a chance to sit behind a thing that I had no idea that I was gonna love," he said.

"It's not. It's actually not. It doesn't look great, but it gets me where I'm going."

Benetti said he's not a disability activist, but he knows his story can be important: "I'm a guy who walks a bit different, and whose eyes go in totally different directions," he said.

He shares some everyday moments about CP in a series of cartoons for the Cerebral Palsy Foundation, called "Awkward Moments."

One was about the "disability blurt out," in which a young child sees someone with a disability and then asks his mother, "Hey, what's wrong with that man?" And the mom shushes the kid.

"I've seen that; I've lived it," said Benetti. "It's happened to me dozens of times. That in no way teaches the kid what he's or she's looking at. By saying 'Shhh,' they're trying to make my life better. But long-range, there's less understanding, so the hope is that there's just more curiosity about what's going on and more openness."

"Do you ever dream about doing an interview where we don't have to mention CP?" Simon asked.

"Here's the thing: I mean, honestly, it's part of me. So many people travel this world and don't know what's unique about them. I already have one built in."

You can watch the full  interview by Scott Simon of NPR here: https://www.cbsnews.com/news/sports-announcer-jason-benetti-on-being-a-voice-for-those-with-cerebral-palsy/