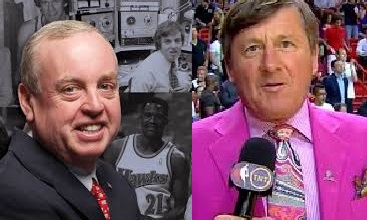 February 16, 2017 - Steve Holman, longtime radio voice of the Atlanta Hawks, and the late Craig Sager, colorful TNT sideline reporter, will be inducted into the Atlanta Sports Hall of Fame at their 13th annual awards and induction ceremony on February 17.

Holman, a Lifetime Member of the American Sportscasters Association, arrived in Atlanta in 1980 to work on Falcons football and Chiefs soccer and has been a fixture there ever since. Known as the "Ironman of NBA broadcasting," Holman has done the radio broadcast of every Hawks game since being named the sole radio play-by-play announcer for the team in 1989. It's a streak of epic proportions that has reached nearly 2,500 games, the longest of any current NBA broadcaster.

When asked about setting his sites on Chick Hearn, the ASA Hall of Famer and Los Angeles Lakers voice who called an astounding 3,338 contests in a row, Holman laughed and said, "I'm 62. God willing, I can make it."

Sager, a longtime member of the ASA who passed away last December after a lengthy battle with leukemia, was one of the first sports reporters at CNN when the network launched in 1980.  He later moved to sister stations TBS and TNT where he covered such major events as the Goodwill Games, Pan American Games, the World Cup and the Olympics.

Sager is best known for his over 20 years as a reporter for the "NBA on TNT" where he patrolled the sidelines in his colorful attire. Having never worked an NBA Finals, he was given the opportunity in 2016 by ESPN to work the sidelines of Game 6 with ASA member Doris Burke. Shortly after, he received the Jimmy V Perseverance Award at the ESPYs.