A Tribute to Frank Gifford:
A touching story of Gifford's kind gesture to his former partner Howard Cosell 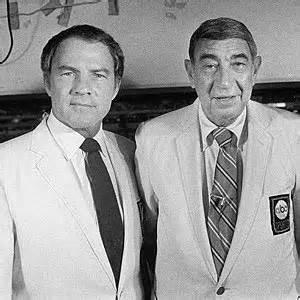 Having personally known both Frank Gifford and Howard Cosell for many years, the following tale told by Gifford to Glenn Beck personifies the wonderful, forgiving person Frank Gifford was.

I believe it is worth repeating.

"He went and visited him every week until he died. And nobody — nobody knew what was going on. But even Howard’s family didn’t come to visit him. And it was in the end, just Frank Gifford, that went and did the right thing and comforted a man who was in his last days. I am truly sorry for the loss of Frank Gifford because of his family. His family is wonderful. His wife is remarkable. Just a remarkable woman. And Frank Gifford was one hell of a guy."