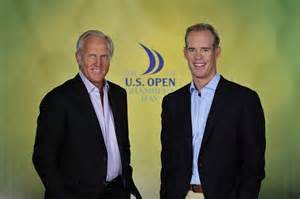 July 8, 2015 - The U.S. Women’s Open begins tomorrow at the Lancaster Country Club, and Fox Sports will be offering more than 15 hours of live coverage to over 50 countries around the world.

The network, in its first year of a 12-year, $1.2-billion deal with the United States Golf Association, will air the first two rounds on Fox Sports 1 on July 9-10 and the third and final rounds on Fox on July 11-12.

Play-by-play announcer and ASA member Joe Buck will be joined by partner Greg Norman and two-time U.S. Women’s Open Champion Juli Inkster. The trio will be calling the action from the Fox booth at the 12th green. Holly Sonders will also be part of the coverage as an on-course reporter.

This year marks the 70th anniversary of the tournament, with last year’s champion, Michelle Wie, set to defend her title against the likes of past Open winners Inbee Park and Paula Creamer, 2014's runner-up Stacy Lewis, and LPGA tour-money leaders Karrie Webb, Lydia Ko and Anna Nordqvist.  The women will be competing for a purse of more than $4 million.

This is the ninth time a Pennsylvania course has hosted a Women’s Open and the first for the Lancaster Country Club. Located in the heart of Amish Country, the course opened in 1920 and underwent an extensive renovation in 2007 under the guidance of golf course architect Ron Forse.

Legendary golfer and ASA member Arnold Palmer will serve as Honorary Chairman of the event. Palmer, a Pennsylvania native, was very instrumental in bringing the championship to the Lancaster Country Club and has a unique connection to the course. He played there in the 1948 Pennsylvania Amateur, where he lost to member and eventual champion Billy Haverstick.

The community has embraced the hosting opportunity as well. Over 2,500 volunteers have signed up to work the championship with another 300 on a waiting list if needed. Those in attendance will also get to sample some of the local flavor, as over 70% of the vendors will be from the Central Pennsylvania area.