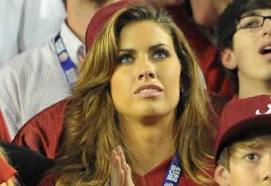 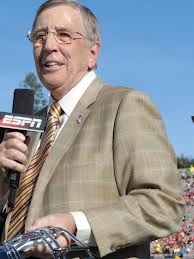 January 9, 2013 - One day after ESPN apologized for Brent Musburger "going too far" in his comments about Katherine Webb, the girlfriend of Alabama quarterback AJ McCarron and former Miss Alabama said she didn't think such a gesture was necessary.

"I think the media has been really unfair to (Musburger). I think if he had said something along the line if we were hot or sexy, I think that would be a little bit different," Webb told Lauer.

"The fact that he said we were beautiful and gorgeous, I don't think any woman wouldn't be flattered by that. I appreciate it, but at the same time I don't think I needed an apology."

When Musburger made his comments – "What a beautiful woman," he began – they sounded ogling and over-effusive. But there's a fine line between praise and objectification. While Musburger was too close to that line, he didn't seem to cross it.

"On one hand, you can look at it as being kind of like the dirty old man, but I'm used to this and I think if you really look into what that he was trying to say, he was trying to be complimentary, and I think they need to give Brent a break," he told Atlanta's Fox affiliate.

Katherine Webb said the focus should go back on the Crimson Tide, who are back-to-back national champions and are "the real winners."

E-mail your comments to