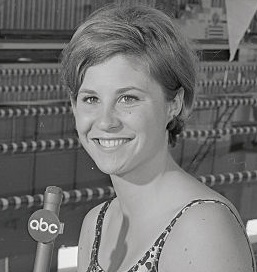 Donna de Varona at age 17 when she appeared on ABC's "Wide World of Sports," the youngest woman ever for a network.

Its inaugural March 6th episode featured ASA Advisory Board member Donna de Varona. Named by Sports Illustrated as one of the greatest female athletes of the 20th century, the two-time Olympic gold medal swimmer was one of the very first women sportscasters at the national level when she joined ABC Sports.

“I started at age 17, de Varona said. “I had a work permit and my very first assignment was broadcasting live swimming next to the legendary Jim McKay.”

As you could imagine, breaking into the male dominated field was no easy task.

“It was very difficult,” de Varona said. “Whenever I worked with Jim McKay, Keith Jackson or Curt Gowdy, I knew they were in charge and I knew I had to give 1000%. .. I used to put my name on every assignment to make the network  feel guilty so they would assign me one. Every time you were on the air you had to hit the home run because you might not be on the air again for another three to six months... It took me from the age of 17 to 35 to get a sustainable career in sportscasting.

“I had to learn every aspect of the business to survive... I traveled all around the world on my own money so I would know what was going on internationally... I was the only woman in management and on air at ABC Sports, which was unusual because I had to get consent from the network to do both... Eventually I represented the network in setting up negotiations for rights fees with the Olympic committee.”

While de Varona agrees that women have come a long way since then, there’s still work to done.

“It’s still tough,” de Varona said. “I think sports is way behind news. We have our sideline reporters, but we’re not the executive producers, we’re not the directors. The rare person makes it through with unusual circumstances.”

Outside of her storied swimming and sports broadcasting career, Donna has been a fierce supporter of women in sports, becoming the co-founder and first president of the Women’s Sports Foundation.

You can hear the full podcast at:  https://www.iwforum.org/olympic_gold_medalist_donna_de_varona