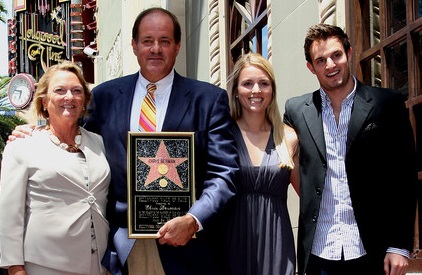 Chris Berman with his wife, Kathy, and children, Meredith and Doug, at the Hollywood Walk of Fame in 2010

May 10, 2017 - It is with a heavy heart that I report the sad news that Kathy Berman, wife of ESPN pioneer Chris Berman, died in a car accident on Tuesday, May 9, in Connecticut. She was 67.

According to the police report, Mrs. Berman’s vehicle collided with another car, rolled down an embankment and overturned into a pond. The driver of the other car, Edward Bertulis, 87, was also killed after his car hit a utility pole. The cause of the crash is under investigation.

“On behalf of the American Sportscasters Association and the entire sportscasting community, I would like to offer my deepest sympathies to Chris Berman and his family on the tragic death of his wife, Kathy,” stated Dick Enberg, ASA Chairman.

Berman, a two-time winner of the ASA’s "Sportscaster of the Year" Award, met the former Katherine Alexinski when he faked car trouble so he could ask her out on a breakfast date. Mrs. Berman, a graduate of the University of Connecticut, was a fourth grade teacher at the time the two were married in 1983. The couple have two children, Meredith and Doug.