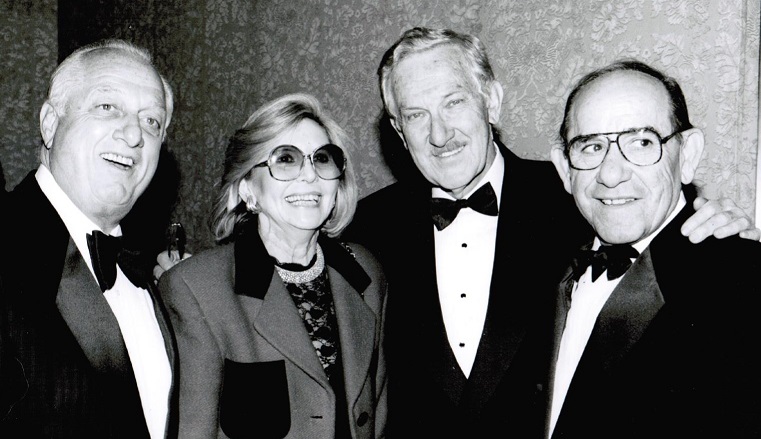 Carmen Berra along with Tommy Lasorda, Lou Schwartz and husband Yogi at the ASA's 11th annual Hall of Fame Dinner ~ 11/30/95

March 14, 2014 - Carmen Berra, longtime wife of New York Yankees legend Yogi Berra, died on March 7 of complications from a stroke. She was 85.

The former Carmen Short met Yogi while she was a waitress in their hometown of St. Louis, MO. The two started dating and were married in 1949, just before the Yankees started their string of five consecutive World Championships. Yogi went on to win five more World Series titles, as well as appear in 18 All-Star games and earn three American League MVP Awards.

Through it all, including Yogi’s 14-year feud with the late Yankees owner George Steinbrenner after being fired as manager in 1985, it was Carmen who was always by his side. The couple celebrated their 65th wedding anniversary on January 26th and have three children, including son Dale who had a short stint with the Yankees, as well as 11 grandchildren and one great grandchild.

The Berras attended several of the ASA’s Hall of Fame Dinners, including in 1990 when Yogi accepted the Lifetime Achievement Award for longtime friend and teammate Phil Rizzuto and in 1995 when Berra presented the Humanitarian Award to childhood friend Joe Garagiola.

ASA President Lou Schwartz remembered the time he met the couple shortly thereafter in the United Club at the San Diego International Airport.

“Carmen spotted me and asked Yogi, ‘Isn’t that one of the sportscasters from the ASA dinner?,’ Schwartz recalled. Yogi replied, ‘No, that’s Lou Schwartz, President of ASA,’ and he asked me to join them for a cocktail.”

A private funeral was held on March 11th in Montclair, NJ, where Yogi and Carmen have spent most of their lives together, and the home of the Yogi Berra Museum & Learning Center.