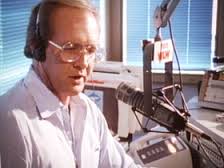 After a 10 year NFL career as a Pro Bowl tight end with the Cincinnati Bengals, Trumpy began his broadcasting career in 1978 as an NFL analyst for NBC Sports.

On the radio side, Trumpy called "Monday Night Football" for NBC Radio alongside Don Criqui in 1985 and 1986, as well as Super Bowls XX and XXI. In 1999, he joined Westwood One Radio as the "Sunday Night Football" analyst, serving in that capacity through his retirement after the 2007 season.