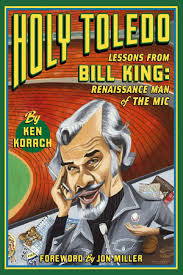 Korach, was King’s partner for 10 seasons until King’s death in 2005, and he is the perfect one to bring Bill to life on the page. A half-century ago, Ken was a kid in Los Angeles, spinning the night dial to tune in Warriors basketball games from faraway San Francisco for one reason: He just had to hear Bill.

Now he tells the remarkable story of King, the legendary voice of the A’s Warriors and Raiders, a  student of Russian literature, the passionate sailor, the fan of eating anything and everything from gourmet to onions and peanut butter, the remarkable painter and the list goes on and on.

King was a beloved figure in California for decades and celebrated for his passion and precision in calling a game and for his colorful life away from sports. He was an utterly original figure who still lives today in the hearts and memories of countless fans. Bill was also one of the most influential broadcasters of all time, an inspiration to legions of his fellow broadcasters who looked up to him.

“We all wanted to live vicariously through Bill. The things that he did, we wished we could do." ~ JOHN MADDEN

There is also a moving foreword by Jon Miller, ASA Board member and voice of the San Francisco Giants, who as a young sportscaster rising through the ranks also drew inspiration from King.

Korach’s book is available on amazon.com, so pick up a copy so you can delve into the life of a true renaissance man, legendary broadcaster Bill King.