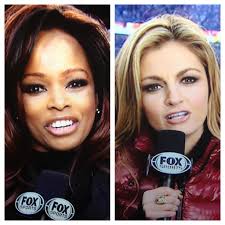 July 16, 2014 - Pam Oliver, veteran Fox NFL sideline reporter, will no longer be working with the No.1 broadcast team of Joe Buck and Troy Aikman. Oliver, who has been the top Fox reporter for the last 12 years, is being replaced by former ESPN reporter Erin Andrews.

Oliver, 53, had a feeling her job might be in jeopardy back in February as she prepared to work her final assignment, the Super Bowl, before her contract expired. Fox executives met with Oliver shortly thereafter to discuss her future with the network.

The end result was Oliver signing a multi-year deal which includes a 20th and final season working the sidelines with Fox's No. 2 team of Kevin Burkhardt and John Lynch. She will then be elevated to a Senior Correspondent position focusing on off-the-field assignments for both Fox and Fox Sports 1.

In a prepared statement Oliver said, “I’m over the moon for the opportunity to expand my contributions to include a wider variety of sports and programs, while still getting to report from the sidelines on NFL Sundays. I’ve already spoken with Kevin and John and I’m really looking forward to being part of their outstanding team this season.”