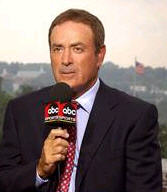 The Rozelle award is presented as recognition for "long-time exceptional contributions to radio and television in professional football."

Michaels is entering his eighth season as the play-by-play man for NBC's “Sunday Night Football” after a 20-year run in the same role for ABC's “Monday Night Football.” He has called eight Super Bowls, including Super Bowl XLVI -- the most-watched program in U.S. television history.

A seven-time Emmy Award winner, Michaels is the only commentator to call the Super Bowl, World Series and NBA Finals, and host a Stanley Cup Final for network television.

Michaels has also covered numerous Olympics, including his unforgettable broadcast in 1980 of the U.S hockey team's gold-medal run at the Lake Placid Games when he made the memorable call of "Do you believe in miracles? Yes!" as the Americans upset the Soviet Union.

In 1995, Michaels was named the ASA’s “Sportscaster of the Year,” as voted by its membership, and received his award at the 11th annual ASA Hall of Fame Dinner.