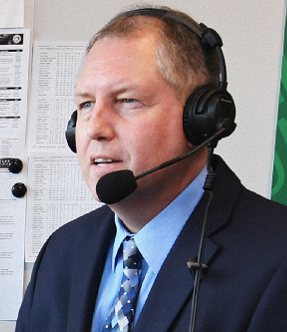 September 5, 2018 - They say, "Good things come to those who wait." That couldn't be more true for Tom Nichols, minor league broadcaster for 31 years who finally got his shot to call a major league baseball game.

Nichols, the broadcaster for the Cincinnati Reds' Class A Affiliate Dayton Dragons, was given the opportunity to do play-by-play alongside Reds announcers and ASA members Marty Brennaman and Jeff Brantley on the Reds Radio network during the fourth, fifth and sixth innings of the Reds' victory over the Milwaukee Brewers, 9-7, on August 28.

It was a dream come true for Nichols, especially working with his boyhood idol Brennaman, the Hall of Fame broadcaster who has been a fixture in the Reds' broadcast booth since 1974.

“It’s definitely something I’ve dreamed of my whole career,” Nichols said. “It was literally thousands of hours of listening to those game broadcasts that provided the motivation to forge a career in baseball broadcasting. In a sense, it’s an opportunity to get into the broadcast booth with the person who more than anybody else was the model for my broadcast career in Marty Brennaman. It’s something I’ve wanted to do since I got into this business.”

Nichols broadcast his 4000th minor league game in August. It was then that the Reds and Dragons, the seventh team Nichols has worked for in his 31 years in the minors, came up with the idea to give the broadcast veteran a shot at the big leagues.

“Once you enter the business, you’re just looking for that opportunity to work in the big leagues,” Nichols said.  “That ship has sailed.  I’m 54 years old now, so it’s unlikely I’ll get a full-time MLB job at this point based on that they are looking for younger guys now. For me, this was the right career, whether it was major league or minor league.  It’s something I’ve enjoyed my entire career, and that’s why I continue to do it after 31 years.”