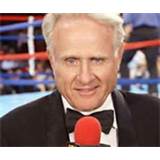 Dec. 14, 2012 - Larry Merchant, longtime boxing Analyst for HBO Sports, stated that he is retiring from ringside as of Saturday December 15th, when he will work his last fight.

Merchant, who is rated as one of the most knowledgeable and sometimes controversial boxing analysts, will be in Houston, TX, for the season finale of “World Championship Boxing.”

A 2009 International Boxing Hall of Fame inductee, Merchant has been paired with Jim Lampley since 1988. Max Kellerman, who has alternated with Merchant the past few years, will now be the full-time HBO ringside boxing commentator and post-fight interviewer. Kellerman joined HBO Sports in 2005.

His departure will culminate over 35 years of “telling it like it is” for Merchant, who says he will become a ''Tom Brokaw-like senior kibbitzer on major news and events in boxing.”