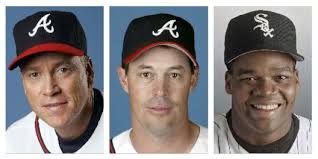 (Courtesy of the Baseball Hall of Fame)

January 8, 2014 - For only the second time since the first National Baseball Hall of Fame class in 1936, the Baseball Writers’ Association of America elected three players in their first year of eligibility to the Hall of Fame in balloting verified by Ernst & Young.

Pitchers Greg Maddux and Tom Glavine and designated hitter-first baseman Frank Thomas all cleared the 75-percent plurality threshold to gain election to the Hall of Fame and will be inducted in ceremonies July 25-28 at Cooperstown, N.Y.

Maddux was the leading vote getter with 555 votes of the 571 ballots, including one blank, cast by senior members of the BBWAA, writers with 10 or more consecutive years of service. That represented 97.2 percent of the vote. Glavine received 525 votes (91.9 percent) and Thomas 478 (83.7). It marked the first time that three first-ballot nominees were elected since Nolan Ryan, George Brett and Robin Yount in 1999.

Craig Biggio missed the 75-percent cutoff point of 429 by two votes, tying Nellie Fox in 1985 and Pie Traynor in 1947 for the smallest margin in balloting history. Traynor was elected in 1948. Fox was in his last year on the ballot and was subsequently elected by the Veterans Committee in 1997. It was Biggio’s second year on the ballot. Players may remain on the ballot for up to 15 years provided they receive five percent of the vote.

The election of Maddux and Glavine marks the first time since 1992 that two former big league starting pitchers entered the Hall in the same class. That year Tom Seaver was elected by the BBWAA and Hal Newhouser by the Veterans Committee. The last time two former big league starting pitchers were elected in the same year by the BBWAA was 1991 – Ferguson Jenkins and Gaylord Perry. Jenkins and Perry were also prior members of the same rotation to be elected together, having pitched albeit for only part of each season with the Texas Rangers in 1975 and 1980. The last time two big league starters that pitched at least one whole season in the same rotation were elected to the Hall of Fame was 1946; Jack Chesbro and Rube Waddell took regular turns in the Pittsburgh Pirates rotation in 1900. Another member of the Class of 1946, Eddie Plank, was in the Philadelphia Athletics rotation with Waddell from 1902-07.